Gold Coast teen stars in Closing Ceremony and records Games song with Katie Noonan
IF the opening and closing ceremonies proved anything, Gold Coast vocal sensation Luke Harrison reckons they proved he can keep a secret.
The 13-year-old student sang live in two numbers at the Commonwealth Games Closing Ceremony on Sunday after the Queen’s Baton Relay Song he recorded with musical director Katie Noonan in March was played at Carrara Stadium as the Queen’s Baton arrived and was handed over at the Opening Ceremony.
“I was unable to tell anyone about my performance or involvement in the Games so now I know I can actually keep a secret,” Luke said. 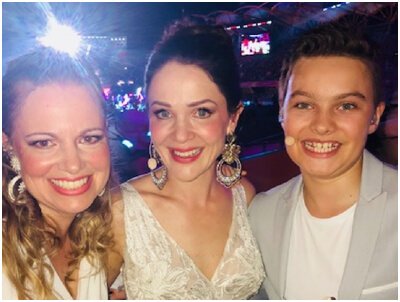 Touted by many as ‘our next Hugh Jackman’, All Saints Anglican School student Luke said it was a thrill to work alongside a musician as gifted as Noonan
“Katie Noonan is absolutely incredible,” he said.
“She is an amazing musician, both singer and instrumentalist. She is so gifted musically — a true creative. She is extremely professional and treated me so well and with respect.
“I felt so honoured to meet and to work with her and our voices blended so well together.”

He also featured as a backing vocalist in the Closing Ceremony finale when Archie Roach sang Put a Little Love in your Heart, joined by Guy Sebastian, Ricki Lee and The Veronicas.
“Now that was soooo much fun,” Luke said.

A multi-instrumentalist who plays piano, cello, drums and percussion, Luke worked closely with Noonan in the months leading up to the Games, recording the Queen’s Baton Relay Song with her in March.

“Whilst I was recording Eliza’s Aria prior to the Games, the music director Katie Noonan asked me if I could record an original song — the Queen’s Baton Relay Song she and recording/sound engineer for the Games Michael Tan had written,” Luke said.
“I only had a few minutes to sight-read it and learn it before I recorded it. Being an instrumentalist was a great help as I can sight read.”

A few weeks later, Luke learned the ‘executive committee’ overseeing the Games ceremonies had selected him and Noonan to perform the Queen’s Baton Relay Song at the Closing Ceremony as the baton entered Carrara Stadium to be handed over to the next Games host city of Birmingham.
“I was very happy as you can imagine as I now had a role in both ceremonies,” Luke said.
In addition to his many musical commitments – from school choirs, bands and orchestras to appearances in professional stage musicals and community theatre productions. Luke is also a handy basketballer and swimmer.
The Closing Ceremony was panned by viewers and Channel 7 host Johanna Griggs live on-air after the network copped criticism for not showing the athletes entering the stadium, including flag bearer Kurt Fearnley. Asked how it felt performing centre stage at Carrara Stadium, Luke said he was both proud and excited.
“Feelings of incredible excitement, honour and pride performing for my country, the Commonwealth and to a large television audience around the world and also live on the Gold Coast where I live,” he said.
“I feel complete when I am on stage performing — it’s my passion and where I feel I belong so yes, I guess I felt comfortable doing what I love.
“The atmosphere was amazing and I was pumped and full of energy.”
Luke said he was surprised when the ceremonies and musical director Noonan were widely criticised.
“I was surprised to hear about the criticism but understand everyone is entitled to an opinion,” he said.

“For me, my focus was on my role as a performer and what I could bring to the Games through my passion and my personal experience was nothing other than positive.
“Everyone treated me with respect and I did the same.
“All feedback from my performances has been fantastic from my family, school friends and my social media.”
After performing for such a big crowd in such a huge production, Luke admits he’s more determined than ever to chase his dreams.
“Yes, I am hooked,” he said.

“Every experience I have as a performer cements that feeling that this is the right path for me.
“For a month or so before the Games I recorded Eliza’s Aria and the Queen’s Baton Relay Song with Katie Noonan on the Gold Coast and I had three rehearsals the week before the Games — a stage orientation, microphone and costume check and a dress rehearsal.
“It started to feel very real and exciting that week before.
“It was an honour to be treated so well at rehearsals and to be looked after by so many different people and be driven in and out etc.”

Luke said appearing alongside and meeting so many well-known performers was also a highlight.

“Everyone was very kind and nice and willing to chat with me and have a photo and a little fun,” he said.

“As I mentioned, I was also in the finale backing iconic singer Archie Roach and got to sing on stage with the stars like Guy Sebastian, Ricki Lee, the Veronicas and Dallas Frasca as we all backed Archie.
“A highlight was meeting and chatting with Guy Sebastian, DamiIm and Ricki Lee (we share the same birthday). I also met Dallas Frasca, the Veronicas, Archie Roach, Kate Ceberano and the Koi Boys, who were very cool.

“A highlight was also meeting music maestro John Foreman – wow. Just amazing.”
The experience has already opened up a world of opportunity for Luke.
“I have a TV interview in Melbourne on Thursday and some radio interviews on the Gold Coast coming up from the Games,” he said.
“I am a lead role in my middle school musical, a techie and mentor for my school’s junior school musical The Lion King, which my sister Sophia has a lead role in.

I plan to write another original song with my US record producer soon and I have just been signed by music management in Melbourne which will bring some exciting opportunities. “There is so much to keep busy with and I have to make time for school commitments, training, my instruments and sport”.

“It’s very busy but incredibly exciting days.”
Luke is no stranger to recording, he travelled to the US last year to record the three-track CD Heaven’s Song, featuring his original title track and his versions of You Raise Me Up and The Prayer. See Luke’s website… http://lukeharrisonperformer.com for details. 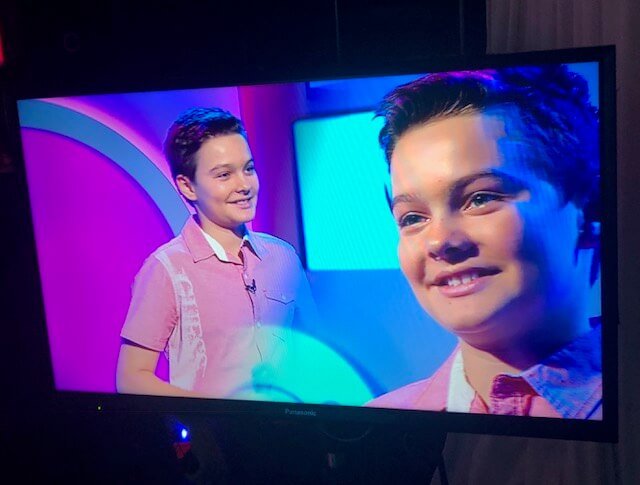 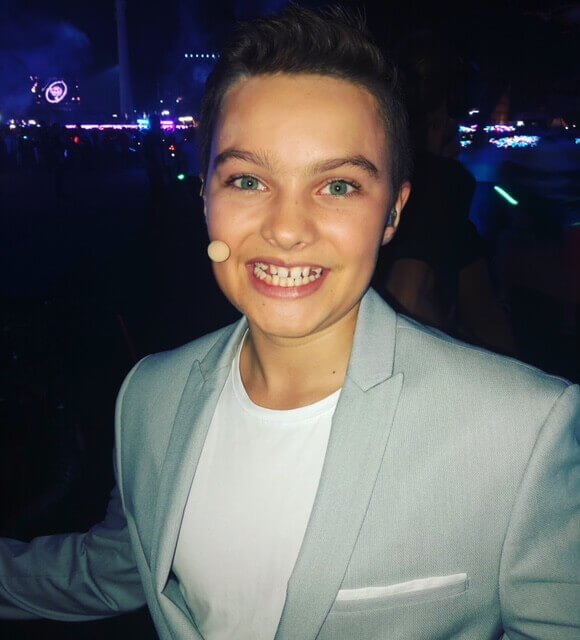 On March 2018 Luke recorded the Queen’s Baton Relay Song with Music Director Katie Noonan for the Gold Coast 2018 Commonwealth Games Opening Ceremony.
On 4 April 2018 this song played throughout the stadium as Her Majesty’s Baton arrived and was handed over at the Opening Ceremony.