THE calibre of young talent on the Gold Coast is high, perhaps none higher than the students who starred in All Saints Anglican School’s production of Mary Poppins.

The Merrimac private school pulled out all the stops, to the point their interpretation of the magical megamusical resembled something closer to a professional show than a school play.

Based on the book series by P.L. Travers and the 1964 Disney movie it inspired, there’s tap dancing, flying kites and even flying humans.

A fierce Olivia Page is an absolute joy as the title character: she dances with spirited efficiency and brings a technical prowess to every song that is well beyond her years.

But the show isn’t a vehicle to showcase one spectacular student (as so many school musicals do), the commanding Angus Reardon received just as many showstoppers for his portrayal of the cockney-of-all-trades Bert.

Then there’s the Banks family, whom Mary flies in to save: there’s George (Jon Cornish) a banker, who prioritises money over his family, his wife Winifred (Emily Briegerr), a former actress who ponders the identity problems of “being Mrs. Banks” and the mischievous Jane and Michael (Ellie McMahon and Luke Harrison), who are crying out for their father’s attention.

The show relies heavily on the young duo, who (unlike professional child performers) don’t have understudies to rotate with throughout the week.

But you would never know, because Ms McMahon and Mr Harrison don’t miss a beat, singing and dancing their way through the show with as much voracity as their more experienced co-stars.

Visually, All Saints captured the extravaganza of this Disney-Cameron Mackintosh production with sets flown in from Melbourne (kudos to the backstage crew who seamlessly moved dozens of sets throughout the show) and hundreds of costumes made in-house.

From the wispy Dickensian beards of the comedic elderly bank employees to the statue who came to life in the Jolly Holiday sequence, it’s easy to forget you’re watching a school production. 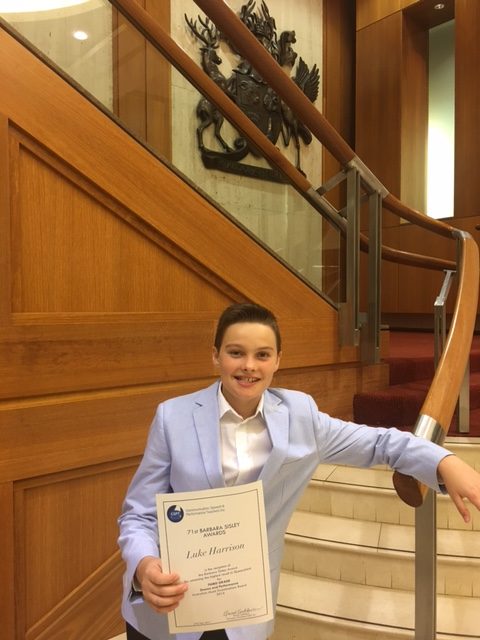 Luke speaks at Parliament House in Brisbane and  receives a Barbara Sisley Award for gaining the highest mark in Queensland for Drama and Performance for the third time.